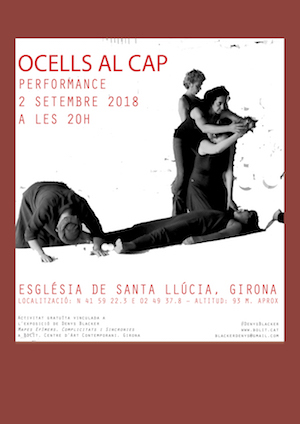 As the members of the public entered the church, the artists are standing in a line. Behind them is one of the group who will fix her eyes on one of the back of one of the artists at a time and try to imagine that she is literally touching that person with their “eyes that touch”. If someone feels that they are being touched they lift their hand. Sometimes they are right sometimes they are wrong.

The audience was invited to participate by asking an important question for our times. Those who wished to ask a question sit one by one at the table where they write down their question on a paper and hide it from sight. One of the artists then sits next to the questioner at the table to write down what they see in the improvisation. The artists then make an improvised reply to each question. Those who feel moved to move take part, those that don’t, remain still. After they have finished, the question is read to the audience and a discussion takes place about how relevant the action was to the question.

Half way through the evening the electricity failed and the audience lit the space with their mobile phones.